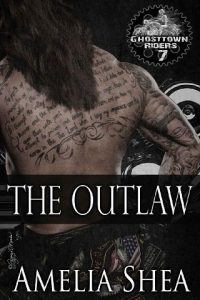 After years of living under the thumb of her family, Vada Zink has finally broken free, embarking on her new life, living it on her own terms. With her newfound independence, she sets her sights on pursuing her lifelong dream of teaching, settling into a place she can finally call home and begin truly living. As she quickly learns, navigating through who she was and who she wants to be has its’ share of humps along the way but she is thriving in her new life. The only predicament standing in her way, is the dark cloud looming over her head brought on by an action so reckless it could have deadly consequences. Thankfully it’s a secret well-hidden and one she will keep forever.

As a recently departed member of the notorious East MC, Roman “Hades” Monroe has settled into life as a member of the Ghosttown Riders. Back with his brother, doing his best as a single father and living in the small town. For once, he’s on the right side of the law. But old ties don’t just fade. When his former brotherhood sets their sights on his secret obsession, Hades becomes protector and guardian to an unknowing Vada.

Their interactions and relationship have been nothing less than heated and hostile with an underlining desire, neither one has been willing to admit to. Until circumstances risk her safety. When Vada hits the radar of the notorious East MC, she becomes a key player and possible pawn in what could be Hades biggest downfall. It becomes a battle of his future with Vada versus his past with the East MC.