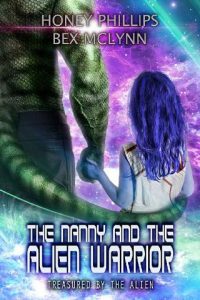 The Nanny and the Alien Warrior (Treasured By the Alien #5) by Honey Phillips, Bex McLynn – Free eBooks Download

Can an alien warrior who has given up hope find a new future with the woman and child who need him?

Joanna is snatched away from her peaceful academic life and sold to K’herr, a forbidding alien warlord. To her relief, he only wants her as a caretaker for his precocious daughter, Sultavi.
A year later, Lord K’herr is dead, and Joanna and Sultavi are on the run from his killers. Their only hope is to locate a down-on-his-luck mercenary who owes K’herr a debt of honor. Joanna doesn’t expect to find a massive green warrior with the saddest eyes she’s ever seen.
Craxan lost his family and his future in the great plague that decimated the Cire race. Since then, he’s led a hollow life using his warrior skills for anyone who can pay.
When the daughter of an old acquaintance appears, demanding his assistance, he reluctantly agrees to help her. But the delightful little girl – and the enchanting human female who accompanies her – quickly win him over.
He promises to take them to safety, but the more time he spends with them, the more he is convinced that they belong with him. He finally has a cause worth fighting for – but even if he can keep them safe from their enemies, what does a worn-out warrior have to offer?