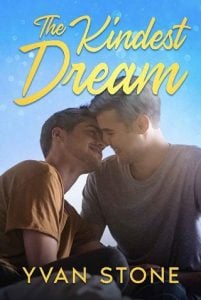 “The Kindest Dream”
Oliver is a seventeen-year-old boy who has recently moved to a new city. He finds himself in a new school and at a new dojang (Tae Kwon Do field) surrounded by people he is not used to. But he thinks that even though he is facing some changes, his life will remain the same.
That is until he meets Marcus, an eighteen-year-old guy who appears to have his life put together and the personality to take on the world. Specially after he competes at a Tae Kwon Do tournament along with two rising stars. He is out and proud.
When Oliver realizes after a few days of training he’s falling for Marcus, he decides to keep all his thoughts and feelings to himself with the idea their relationship could only exist in a dream. But when Marcus takes the initiative to start a conversation and a friendship leading to an unexpected kiss, perhaps he does have a chance.
But not everything is as simple as that. Oliver is trying to come out of his shell and the closet while Marcus is simply living his life the way he wants it. But their story gets a complicated twist when Marcus gets caught up between dating Oliver or leaving the city to follow his calling. And not only that, their fathers aren’t making it easy for neither of them but for different reasons, a divorced father who wants to dictate his son’s life and an out of line dad trying to protect his young kid. When the time to choose comes, will Marcus decision be what he wants or what he needs? And will Oliver be able to break through and find what he’s been seeking all along? Will they see the bigger picture?