Home
contemporary romance
The I Do Over by Samantha Chase (ePUB) 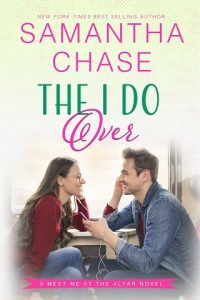 For 48 hours, they were married. But that was a long time ago.
Seventeen years ago, Maddie Christopher told one little white lie, and it has been wreaking havoc on her life ever since. At the time, the lie was worth it—it meant she got to marry the man she loved, however brief a marriage it was—but now she’s ready to finally move on. But in order to do that, she needs to find the man whose heart she broke all those years ago and finally apologize.

Knox Channing has everything he could have asked for in life—after a career in the Navy SEALs, he’s now running a thriving security firm with his two best friends. The only thing that would make it better is if he wasn’t the lone single guy in his friend group. But after having had his heart broken once, he’s not looking to go back there. Or at least that’s what he thought before Maddie showed up in his office.