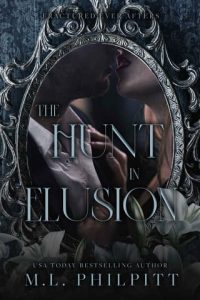 The Hunt in Elusion (Fractured Ever Afters #1) by M.L. Philpitt – Free eBooks Download

Fairy tales and reality are concepts so different from one another, they shouldn’t exist in the same world. The story in which the maid defies her stepmother, goes to the ball, and dances with the prince isn’t how real life works. For Della Lambert, real life is disappointing. Real life means working for her stepfather in exchange for her and her sister’s freedom. Attend the party, steal their secrets, and lure the mafia prince in.
Nico Corsetti isn’t a prince though. He’s the callous underboss who hunts his prey until he’s satisfied in his vengeance. When Della becomes his target, he won’t stop chasing her, even when her betrayal demands her death. In the end, real life isn’t a fairy tale and the prince is simply another controlling villain.