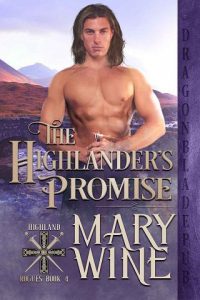 She’d done what she should, now she was going to do what she dared….

Terin Campbell had been obedient. And she’d been desperate. But now? Many would say she’d won the day. Triumphed over the evil planned for her by her late husband and his mother. Terin was still alive and faced with the question of what to do with the rest of her life.
And there was only one thing she was certain of….she wasn’t waiting around for her family to decide her fate.
Was she brazen?
Yes. And for the rest of her days, she was going to follow her own path. Strike out for a place where rumors said a woman could make a place for herself. It might me myth, it might end in her death along the side of the road, but Terin was going to take the chance because she was finished with being submissive.
She wasn’t his responsibility.
Jasper was a third born son and he had to carve his spot out, but the truth was, he enjoyed the challenge that presented. But it didn’t leave much time for rescuing others. But there was something about the little half-starved girl shivering in a common room in the middle of a snowstorm that claimed his attention. It wasn’t the way her little frame shook…no, it was the determination in her eyes.

She was brazen, and bold, and determined to make it north no matter the risk.