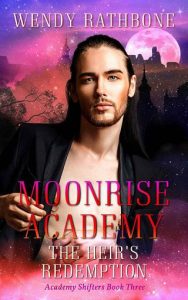 He’s a feared recluse and an emotionless tyrant living in a dark manor filled with painful memories… until he meets the one omega he cannot resist.

Corvaiz is one of the wealthiest alphas in the country with a ruthless business reputation and a frightening countenance. Once, he strictly controlled an alpha tribute who is now married to a professor at Moonrise Academy. Corvaiz bought his way onto the academy board and now walks the school halls just to keep track of his former vassal.
But when he rescues a young omega from a locker room debacle, thoughts of a deeper past trauma guide him as the bullied boy becomes a priority to protect and keep close.
He’s an eighteen-year-old omega who loves to study and get perfect grades… but all that is suddenly threatened.
In his freshman year at Moonrise Academy, Miles loves his classes and new friends. But when he finds himself the target of four senior alpha bullies, he begins to lose his will… until the academy’s biggest investor rescues him from a fate worse than death.
Miles and Corvaiz could not be more unalike. But an electrifying connection begins to form between them. When Corvaiz offers Miles lessons in self-defense, the peace-loving omega is compelled to accept.
As the bullies become more brazen, and Miles’ growing devotion to Corvaiz crosses a teacher/student line, can Miles find the courage he needs to win both safety and the love he desires most?
Opposites attract, age gap, size difference, bullying (not between the two main characters), rescue, virgin/first time, heat sex, knotting, redemption and HEA.

Author note: This is book 3 in the Moonrise Academy: Shifter Academy Series. While The Heir’s Redemption can be read as a standalone, it is most helpful to read the series in order, especially book 2, The Mysterious Boyfriend, where Corvaiz is a major side character.