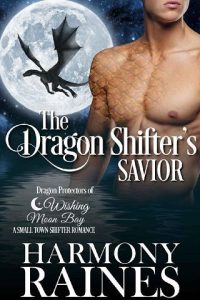 After a traumatic experience, Joron can’t talk to his dragon. Can his mate help them heal old wounds?

After being exiled from Cairnnor, a traumatic event leaves Joron unable to directly communicate with his dragon. But his problems don’t stop there. He’s also lost his treasure, and his sister is missing.
Unfortunately, he has no memories of exactly what happened, and if his dragon does, he is keeping them to himself.
When the old dragon lord is defeated and Joron returns home, he hopes that he might heal. And finally, remember the terrible events that robbed him of his sister and his treasure.

But so far, that’s not happening.

So when he’s asked to go to Wishing Moon Bay, as a member of the dragon guard stationed there, he agrees. Perhaps a complete change might do him good. And if not, he’ll throw himself into his career and help keep other people safe from harm.
Then he meets Dove. She’s an expert on helping animals heal. She also happens to be his mate. Surely fate has brought them together for a reason.

Dove loves the farm she grew up on. She manages it alone which can be tough. Especially where finances are concerned. When she has the idea to rent out a couple of her spare rooms, she doesn’t expect her new lodger to be a dragon shifter who says she’s, his mate.
She instantly warms to Joron, who is scarred from his past. When he tells her he and his dragon don’t talk, she knows she has to help them heal.

However, before they have a chance to get to know each other, Joron’s memories are partially uncovered by a vampire named Silas. This sets in motion a chain of events that leads them into danger, but it might just be the catalyst Joron and his dragon need to finally get them talking again.
Or it might end in disaster as Joron faces a ghost from the past.