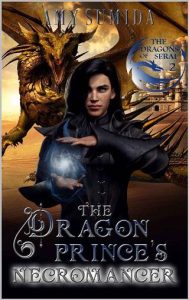 Death walks beside me.
Two weeks ago, I was hired by the Dragon Prince of Zaru to help his brother, the King, deal with their dead. Not that there is an abundance of corpses in their kingdom, but those who die aren’t staying in their graves. As a necromancer, I’m one of the few people on Serai who can put the dead to rest and discover why they are rising. As a Raltven, I’m particularly good at it. Good enough that the King of Zaru sent his brother across the sea to find someone like me.
At first sight, desire sparked between Prince Racmar and me. On the way to Zaru, our attraction for each other had grown. Now it’s reached the point of combustion, but I want more than a single night of pleasure from the Prince. To win him, I must play a dangerous game, tantalizing the man without riling the beast inside him. Between Racmar and the dead, I have some serious work to do, and both are presenting unforeseen complications. The reanimated corpses aren’t talking, something both unusual and unfortunate for my investigation. Then there is Prince Racmar who speaks too much, and his words are clawing at my resistance. I don’t know who will break first—the unknown power behind the dead, the Dragon Prince, or me.
Death walks beside us Raltven, in our shadow form we are akin to spirits, but if I’m not careful, a spirit is exactly what I will become.