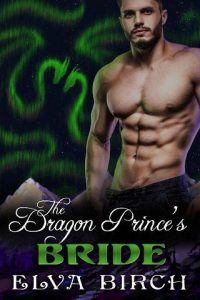 As the oldest daughter of the royal Mo’orea dragon line, Leinani knows her duty, and has made peace with leaving her beloved tropical island behind to become queen of the cold and inhospitable kingdom of Alaska. But fate has considerably different plans…

Prince Tray wants nothing to do with responsibility, and he’s just as happy that the Compact, a magical contract that binds the Small Kingdoms Alliance, has tapped someone else to rule; he’s perfectly content being the family prankster, playing hockey in the backyard, and raising dogs. But his easy life is turned upside down when Princess Leinani shows up to marry his oldest brother and Tray’s dragon recognizes the bride-to-be as his own mate instead.

Kingdom and family come first; the two nobly agree to stay apart and wait out the temporary mate spell, however long it takes. But a relentless enemy has other plans; captured and unable to shift, Tray and Leinani are forced to work together to try to escape, unravel a mystery, thwart a plot to overthrow The Small Kingdoms…and somehow resist each other.