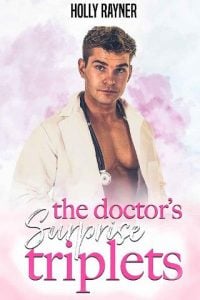 He needed a distraction,
She appeared like a gift from the heavens.
But three babies? That might just be a blessing too many!

Joel Galvin is a hotshot surgeon, struggling with demons,
For all the lives he’s saved, he struggles to find contentment in his own.
But when daycare owner Katie arrives at his clinic one day, he knows instinctively that he’s found something precious.
And that it’s better for both of them if they never act on the feelings that soon bloom…
He tells her he’s a lone wolf; an island.
And even after it’s far too late, they tell themselves they can just be friends.
There’s just one thing getting in the way of that….
Katie’s pregnant, and the man who doesn’t think he’s boyfriend material is about to become a daddy.
Three times over!