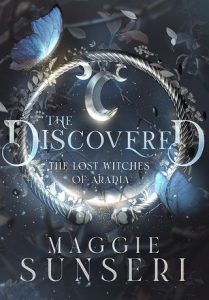 Her magick was hidden to keep her alive. When that power is unleashed, only one witch can protect her.

All Áine wants for her 22nd birthday is a night out in New York City with her normal, human friends. But when her roommate stumbles into oncoming traffic, Áine breaks the bind on her extraordinary, witch-born power to save her. With Áine’s magick now freed, her world shifts, and the voice of a male witch commands her to run.

Hunted by dark forces, Áine is taken to Aradia, the witch realm, by the mysterious and captivating witch, Daelon. A man of perfect control, Daelon needs Áine’s trust to protect her and train her to wield her magick. But Áine considers her “gift” more of a curse and wants nothing to do with the realm of her mothers’ murderers. Even worse, Daelon’s shielding ability makes him the only one impervious to her clairsentience—the ability to read others’ true nature.

As Daelon’s undeniable magnetism puts her under a spell of its own, Áine must decide how much trust and control she’s willing to relinquish. Because as enemies descend, it’s becoming harder to tell if her fierce protector is really a friend… or a foe.