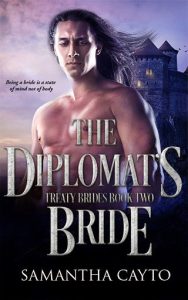 Being a bride is a state of mind, not of body.

Kexen of the Outer Vale has made a unique splash in the Moorcondian palace and has captured the attention of Benedict, Lord Tentrees, a diplomat trying to make his mark. When a winter-long mission arises to negotiate a trading treaty with a foreign queen, Ben needs a wife by his side. Never having been attracted to women, he sets his sights on marrying the enticing Kexen. He means for him to be both a helpmate navigating court society and a shield against the flirtatious queen.
Because Kexen is someone who—by his own admission—is neither male nor female, he is intrigued by the idea of becoming Lady Tentrees and presenting entirely as a woman. Ben sweetens the offer with a lucrative trade deal between their families. Kexen will not ignore his duty while also being drawn to the virile diplomat who desires him. He cannot help but accept the proposal.
Their journey through both their diplomatic mission and marriage proves to be a rocky one. Kexen is not as experienced as his husband first believes, Ben is more driven by his career than Kexen appreciates and neither of them anticipates the intrigue waiting for them at their destination. The strength of their growing bond will be tested as they fight for their survival.