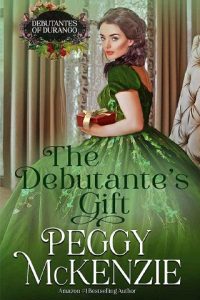 It had been the perfect plan. No detail left to chance. So, what went wrong?

Marianne Sheffield is a practical woman who approaches every problem with a solid plan of action. So, when her identical twin sister needed help getting out of an arranged marriage, Mari took control. Confident she would have no problem outsmarting the ambitious Mr. Banks, she postponed the unwanted wedding until Christmas hoping to wreak havoc on the man’s life and force him to beg off and save her parents from embarrassment. Her plan failed and soon, she found herself married and on her way to Durango with her new husband for a Colorado Christmas. While they enjoyed the festive spirit of the small mountain town, she began to sense there was more to the man than just his rugged good looks and hefty bank account—much, much more. Now, Mari realizes she’s the one who may have been outsmarted.

John Maximillian Banks is a man used to getting what he wants. And when it comes to women, he’s rarely disappointed. When he and Charles Sheffield agreed to merge their companies into one of the largest transportation companies in the region, it’s no surprise when his new business partner sealed the deal by offering his eldest daughter to Max in marriage and making it a family affair. However, it didn’t take long to realize that something was amiss. The stunningly beautiful debutante seemed different than he remembered her. She had been sweet, soft-spoken, and kind then. Now, she was strong-willed. Bold. One could say even bossy. Certainly not the match he had hoped for, but there was something about the feisty, out-spoken, dark-haired beauty that made him wish for more than their business arrangement. He had already won her hand. Now, all he wants is her heart for Christmas. Sometimes the most precious gifts aren’t found inside a pretty box under the Christmas tree.