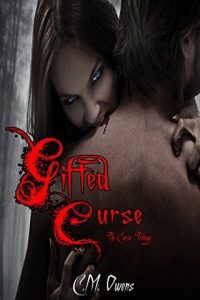 Destined for one who broke her heart, and in love with one she never thought she could trust.

Blood defines who a person is and how they’re treated in Araya Crush’s world. Before she was a powerful hybrid, she was a victim of the vampiric system, one where hybrids are discriminated against and punished for being different, while being groomed to become a weapon if they’re among the gifted. It wasn’t expected for her to fall in love with a full blood vampire, especially after having her heart smashed by her hybrid counter. Brazen was there to pick up the pieces, and though she hated the full bloods for the torture they put her through, Araya learned Brazen was different.

Araya distanced herself from Hale, doing her best to never need him or see him again, but fate had other plans. When dark forces arise, the United is forced to gather its best, and she and Hale are among the elite. His love for her hasn’t wavered, and he refuses to let her go without a fight. Brazen is just as determined, so Araya becomes the rope in a desperate game of tug of war.