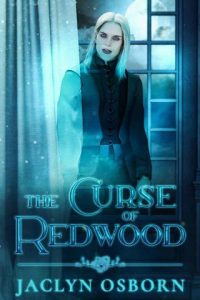 Secrets lie within the walls of Redwood Manor.

The murders, alleged curse, and ghost stories have fascinated Carter ever since he moved to Ivy Grove. After attending a Halloween ball at the mansion and meeting a man almost too beautiful to be real, Carter is captivated even more.
But the man disappears after that, leaving Carter with nothing but the memory of a kiss.
Despite the warnings to stay away, Carter delves deeper into the mystery of Redwood, desperate for answers. He soon finds himself tangled up in a century old curse, one that has claimed countless lives in the past. And at the center of that curse is the man who’d swept him off his feet.
Who is Ezekiel Warren? And how is he connected to the curse?
As Carter unravels the secrets of the mansion, he begins to fall in love with the charming blond who haunts its halls.
Redwood is a place for dead things, yet Carter’s never felt more alive than when in Ezekiel’s arms.
One thing is clear: Redwood Manor has a hold on Carter now. And it’s not only his life on the line, but his heart as well.