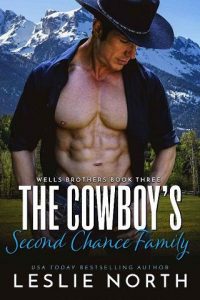 Avery Collins is stunned when her ex, Tucker Wells, stumbles through her door during a snowstorm, pretending ten years haven’t gone by since he broke her heart. Tucker was the love of her life—and the father of their daughter, Shanna—and now he’s claiming amnesia. Well, Avery’s not buying it. At least not at first. What happened to the man who said he didn’t want children, who told her becoming a veterinarian would be a huge mistake? This Tucker is bonding with Shanna and praising Avery’s practice. He’s acting like a better, nicer, sexier version of the boy she once loved. As Shanna’s father, Tucker is definitely back in Avery’s life. But would it be so bad to let him back into her heart?

After years traveling the world as a photographer, Tucker wants to settle down and finally do his part on the family ranch. Though his mind is a bit muddled after falling from his horse, he’s thinking clearly enough to know two things: He’s still in love with Avery and he wants to get to know the daughter he’s just discovered he has. It’s clear, though, that Avery is more than a little wary of him—and for good reason: the story she tells of their breakup definitely paints him as a villain. He might not remember breaking her heart, but Tucker is determined to do what he can to make up for lost time. Yet the harder he tries, the more Avery pushes him away. If only he could remember what made him leave her all those years ago, then maybe he could find his way back to her now…