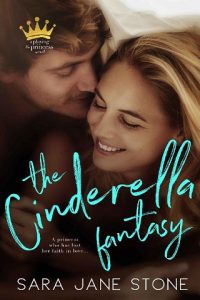 A princess who has lost her faith in love . . .
Lucy Linden’s prince charming (a.k.a. her fiancé) disappeared three months before the Big Day. Determined to pick up the pieces, she dives into the world of online dating. But the only men interested in a woman whose day job involves playing Cinderella leave Lucy looking for an exit strategy before the main course. And the man rushing to her rescue isn’t the solution to her problems. Jared is a walking, talking fantasy—if Lucy’s daydreams began and ended in the bedroom. No one would ever mistake South Florida’s bored billionaire bachelor for a long-term prince.

A man willing to risk everything to prove he’s her prince . . .
Jared Mitchell pushes the limits, in the boardroom and in bed. When his best friend and business partner’s little sister sends up red distress flares, he’s thrust into the role of pseudo-big brother. He’s never had a thing for Cinderella. But now he’s fighting his desire to make the princess his—even if he has to risk his empire to deliver her happy-ever-after ending.