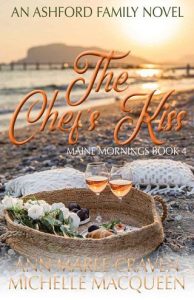 Welcome to Superiore Bay, Maine, your little slice of heaven on the coast. Come visit us for the best small-town gossip, all the wine you can drink, and wild horses. Once you’re here, you’ll never want to leave.

He’s her boss… …nothing more.
Jorgina Ashford was once the princess of Superiore Bay. As the daughter of the man who controlled, well, everything—including her—she had an image to uphold, one that threatened to choke the life out of her.
So, she left.
Four years later and she’s back. A beloved daughter returned with a secret that’ll turn her from prodigal to fallen princess.

As the son of famed celebrity chefs, Hudson Silverman was the toast of New York City. Everyone dreamed of dining at his Michelin starred restaurants. Restaurants he didn’t own. Businesses that could fire him at will. And they did.
A scandal sends him in search of a job. Any job as long as it’s out of town. A terror in the kitchen, Hudson is desperate for employees at the new restaurant he’s been hired to open. No one wants to work for him until he hires the one girl who can open all the doors barred to him in this strange small town.
A girl he can’t seem to intimidate.
Jorgina and Hudson are opposites who shouldn’t work. Not in their partnership or their budding frenemy relationship.
When Jorgina’s secret comes to light, she might just learn the toughest door to open is the one to Hudson’s heart.

Come to Superiore Bay for an escape into this heartwarming and sweet, small town romance with beautiful sunrises, protective brothers, lovable town-gossips, a complicated enemies to lovers relationship, and a family that will steal your heart.
The Chef’s Kiss is the fourth book in the Maine Mornings series. It’s a standalone novel with a guaranteed HEA.