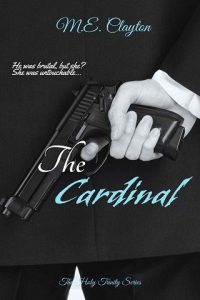 Salvatore Benetti:
As the Benetti Crime Family’s Underboss, Sal has done it all. Never one to shy away from a touch of torture, Salvatore was the organization’s cleanup man. Security and making people disappear were his specialties, and he was very good at it. Loyal only to himself, that all changed when his older brother, Luca, took over the family’s empire, their father’s reign a thing of the past. Now, Sal was the Benetti Underboss, and he had the world at his fingertips.

Blake Turner:
Just trying to survive through life, Blake kept her head down and did her best to be a responsible contributor to society. She held down a job, paid her taxes, and called her mother often. She even kept cleaning up her sister’s messes, though her sister’s ‘second chances’ had run out years ago. However, for the most part, Blake was happy with her life in Morgan City, and even knowing it was run by the Mafia wasn’t enough to discourage her.

When her sister gets in trouble again, and comes to her for help, Blake has no choice but to try to help her come up with the money she owes. After all, this time, her sister’s gotten mixed up with the Benettis, a definite death sentence if Blake doesn’t help her.

Faced with the possible consequences of crossing the Benettis, Blake finds herself in a position she never thought she’d be, and that’s in Salvatore Benetti’s crosshairs.

NOTE: This book contains sensitive subject matter that may be offensive to some readers. Please do not read if you are sensitive to violence, torture, explicit sexual scenes, or delicate situations.