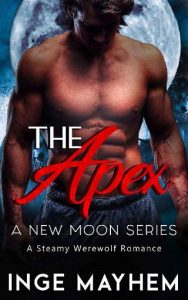 Carl finally learns the truth about his brother. He now sees an enemy, one that he is bent on destroying no matter what it takes. But when he learns of the sacrifice for such an endeavor, he wonders if he is willing to pay the price. Or maybe there’s another way.
Harry is determined to keep Lance safe at all cost from the Mafia werewolves and especially from A, their alpha. He has a plan and finally has the numbers on his side to take down the mafia. But, he might have to kill Carl to accomplish it. Knowing that things with Lance will never be the same if Carl dies, he struggles to look for another option. Or maybe, he has no other choice.
Lance is caught in a world that is too foreign to him and he has no say in it or no way to escape. All he knows is that he cares for both Harry and Carl and doesn’t want to see either of them killed.
As the night they have all waited for draws closer, they prepare for the Apex, the match that would determine the fate of the three men and all that has been built.