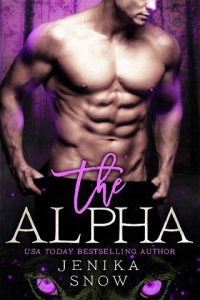 The Alpha (The Lycans #4) by Jenika Snow – Free eBooks Download

I’d never felt like I was missing anything in my life, not until my only friend left to start a journey to find out her own history. It had been clear in the ugliest way that I relied on her company too much over the years.
I needed to make my own path, create my own story.
But then one video call changed my entire life, and I was thrown into a new world where creatures that had only ever been in fiction and movies were now very much real.
And one of them was coming after me.
A werewolf—Lycan—from myth and lore.
He said I was his. He said he was coming for me.
So there was only one thing for me to do. Run.
Cian said he wouldn’t stop until he found me, until he put his mark on my neck. He said he’d go to the ends of the world to make me his mate in all ways.
He’d have one hell of a chase on his hands, because I wasn’t going to make this easy on him.
That was my plan until everything changed–and someone else was hunting us.