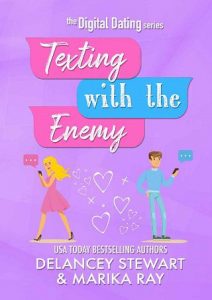 She’s texting him her heart. But she’s got the wrong number…

When Isabel “El” Watson applied for a sales job with her company, she had no idea a jelly donut would explode on her blouse, or that her grumpy boss would practically laugh her out of the interview. Accountants could be salespeople, she was sure of it, even if that jerkface didn’t think so.

Boston’s friend, Chad, never should have given Boston’s number to the girl at the wine festival as a joke, but the damage was done. When El sends Boston a text later that night, believing he is Chad, he’s too nice to hurt her feelings by telling her the truth. But there are a few other truths Boston might have thought about:
Truth #1: He’s her boss
Truth #2: She just accepted a job at his mother’s new winery
Truth #3: He’s always had a crush on her

Even though Boston is no longer El’s grumpy boss, they still work together at his mom’s winery. And while sparks are flying as they get to know each other for real, El’s kind of sweet on the guy who always seems to know just what to say via text too.

Obviously, things will come to a head.

Will Boston come clean about the flirty texts being from him? Or will El figure out on her own that she’s been Texting With the Enemy?