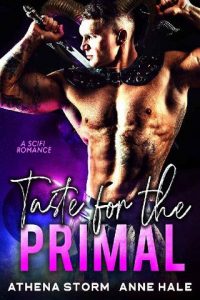 Taste for the Primal (Mates of the Precursors #3) by Athena Storm, Anne Hale – Free eBooks Download

Leave it to Ayric to realize that I’m his fated mate while bashing in heads in battle.
I mean, I get it. I really do.
Ayric is a big, knuckle dragging, alpha male caveman alien.
He’s got giant horns on his head and even bigger muscles on his body.
I wouldn’t mind being fated to mate with him.
Especially when his muscles are glistening in the sun.
Never mind that he’s fighting to protect me and the other fellow humans that crash landed on his planet.
It’s all I can do to wait till Ayric beats everyone down and claims me as his.
He’ll hunt me food to cook for him.
He’ll lay out his bedroll and I’ll keep him company under the stars.
Some of my people say we’ve crashed and we’re trying to survive on a hostile planet.
But with Ayric?
I’m living my best life! If I don’t die, that is.