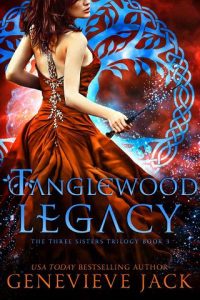 En route to New Orleans with her sisters, Isis Tanglewood wakes in the middle of the night to memories of a demon. Nothing surprises her more than to find shipmate Delphine has also dreamed of the same monster. After their brief encounter, Delphine begs Isis to help her and her sisters avoid forced marriages in New Orleans. Isis empathizes but refuses her for fear of drawing attention to her family’s witchy secret.
Scientist and philosopher Pierre Baron lives to map the stars from his observatory and to research the natural history of the burgeoning colony in Louisiana he calls home. But when he meets Isis, his curiosity is piqued like never before. Magic happens when he makes it his mission to learn more about her, and he soon determines she’s just as curious about him.
When a man is found dead in the Mississippi, drained of all his blood, Isis believes a vampire has come to New Orleans. With Pierre’s help, she soon comes to suspect Delphine. Isis is a powerful witch and a resourceful woman, but she becomes vulnerable in ways she never expected. Pierre’s greatest discovery is his love for Isis, but can he, an ordinary human man, protect her from mystic forces hell-bent on revenge.