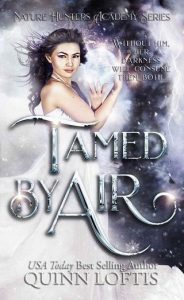 The warriors of the Nature Hunters Academies should be celebrating. By joining forces, they were able to defeat the sinister demon, Dolion, and his battalion of witches. But no battle is won without cost. During the fray, two of their own were lost. Not killed, but taken.
Aston, the air elementalist, was literally snatched from the battle by a woman riding a ferocious dragon. He’ll soon find himself imprisoned in the dragon realm, and he and his captor share a bond he can’t begin to understand.
Shelly Smith, mate to the descendant of pharaohs and powerful fire elementalist, Ra, has once again been kidnapped by Osiris himself. It seems the lord of the underworld doesn’t take too kindly to being bested. Needless to say, Ra is not handling it well, and it takes all of the combined strength of his friends, Elias, Tara, Liam, and Gabby to keep him from tearing after her on a suicide mission.
The dark elementals have momentarily been defeated. But the forces of light aren’t foolish enough to believe their enemies are gone for good. The dark ones will bide their time, hiding, waiting for the opportunity to strike again. Will the weakened light elementalists have the strength to resist them again when the time comes?