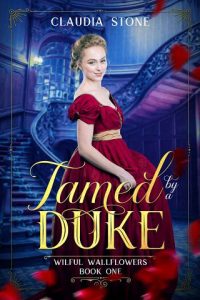 When Brandon Drew issues an edict that his youngest daughter will not be allowed to make her come-out lest her elder sister secures the attentions of a duke, Miss Charlotte Drew is understandably horrified.

As a confirmed bluestocking and dedicated spinster, she has neither the charm or the ability to attract the attention of a duke- never mind the inclination. Luckily, help is at hand from Charlotte’s friends and fellow wallflowers, and soon she is swanning around London on the arm of the Duke of Penrith. True, he is rude, proud, and terribly toplofty, but Charlotte assumes she can temporarily tolerate him for her the sake of her sister. But as Penrith begins to pursue her with more ardour than Charlotte had anticipated, she begins to realise that there is so much more to the snobbish duke than she had first thought….

Hugh Landon Charles Abermale, Sixth Duke of Penrith, had no interest in courting anyone-let alone an opinionated Bluestocking. But when his cousin begs him to woo the shrewish Miss Drew, so that he might win her sister’s hand, Hugh finds himself reluctantly agreeing to the hair-brained scheme. Miss Drew is everything that Hugh abhors in a woman; she is loud, opinionated, and decidedly unladylike…but she is also the most beguiling creature he has ever met.

With time running out, Hugh seeks to discover the secrets of Charlotte’s past, while desperately trying to win her hand.But what will his wallflower say, when she finds out that Hugh has been lying to her from the off?