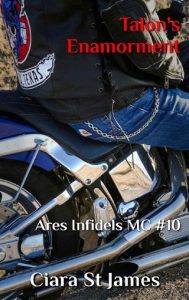 A chance meeting months ago set up a desire within Talon. A second meeting only increased that desire. He hadn’t been thinking too much about settling down until meeting Lorelei. Sure, his club brothers were dropping left and right into marital bliss, but he hadn’t thought he’d be lucky enough to have what they had. Meeting Lorelei and her young son, Zavier, had changed that. He began to hope and dream.
Only after the second meeting, when an angry man confronted Lorelei in a parking lot, Talon hadn’t seen or heard from her in months. He’d given her a way to contact him and she hadn’t done it. Thinking she wanted nothing to do with him, he tried to forget her and move on.
One day, a quick message from his club president changed all that. Lorelei and Zavier were back. He wasn’t going to let her get away this time. As he started to get to know her and her son, he found out Zavier’s father was causing issues. He was insisting on having his son no matter what he had to do. Talon was determined to prevent that from ever happening. This was on top of the club’s continued efforts to clean up Tenillo and find out if the other Fairchilds family members were involved in the illegal world in Tenillo.
Lorelei had been left to raise her son alone. His father wanted nothing to do with them initially, and neither did her adoptive family. She struggled, but she was making it. Her determination to meet her son’s needs was her number one priority. She hadn’t wanted a man in her life, but she couldn’t forget about the sexy, breathtaking biker she’d met twice.
Upon meeting him for a third time, she came to realize quickly that he was set on making her his, and he’d do whatever it took to make it happen, even take on her evil ex. More surprises and secrets were revealed about Tenillo. The club had to get more blood on their hands. Talon would stop at nothing to ensure his new family and the one he planned to grow with Lorelei were protected, no matter the cost.
When the chips stopped falling, one thing was obvious to all who met them. Talon’s enamorment with Lorelei would never fade or die. He was in love for the rest of his life, just like she was.