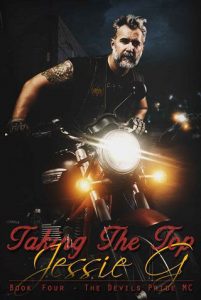 Family man, entrepreneur, member of an outlaw motorcycle club—can one man really have it all? Carlos was close but while corruption was destroying Devils Pride, cancer was wreaking havoc on his home, stealing his wife, and leaving him to raise their children alone. Angela was the love of his life and he never thought he could have that with someone else, much less the too-pushy-to-be-serious son of his enemy.

Mateo’s life was forever changed the day he watched his mother get gunned down by a rival motorcycle club. Hidden from the world by an angry father and groomed for revenge, pain is the one thing he can rely on. The constant that becomes comfort and strength, and a coping mechanism that becomes less effective with every lash. This isn’t the life he’s meant to lead, but with no way to break free, Mateo has two choices: do what he’s told or die.

When a third option presents itself, he isn’t expecting a happy ending. At best, he thinks they can have a moment. A small pocket of time to be seen and accepted, cared for and wanted, by a man strong enough to stop him from doing the unthinkable, while allowing him the revenge he’s more than earned. It would be a solid plan if not for one tiny problem.

Mateo didn’t know he was capable of love and Carlos won’t let it be taken from him again.

Author’s Note: Series should be read in order