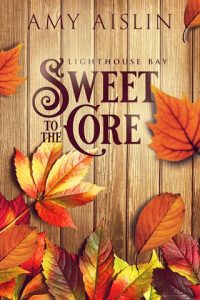 Dev has pined for his cousin’s best friend for years, but no matter how hard he wishes, Clark sees him as nothing but a friend. And it’s as a friend that Clark comes to him for help.
Clark’s father is on the brink of losing his house and the fastest way to make a quick buck is to win the $10,000 prize in the inaugural Sweet to the Core apple baking contest. Only problem? He’s never baked anything that hasn’t come out of a box.
But Dev has. As a baker, he’s Clark’s best chance.
For the first time, Dev has something Clark wants. Only problem? Dev needs the prize for himself. The only thing he wants—besides Clark—is to buy the local lighthouse where he last spent time with his parents before they died.
Working together means opening a lot more than a barrel of apples, though. They may have found the recipe to love.
But will Dev have to give up the only connection he has left to his parents in order to have it? Or will Clark let his father down? They can’t both have everything.
Or can they?