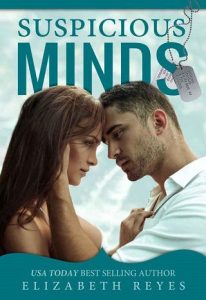 It’s a bitter reality Lorenzo Moreno knows all too well.

After his “good girl” fiancée blind sides him by cheating on him with her ex Lorenzo swears off relationships for a while, if not forever.
Unable to fight the incredible pull he feels to Olivia, a girl who was supposed to be just a meaningless one night stand, Lorenzo gives into his heart. But only after making one thing utterly clear. He will not deal with any exe’s or other men in her life. Period.
For too long Olivia Romero shamefully put up with an manipulative and overly controlling boyfriend. So when fate pairs her up with the gorgeous but intense Air Force pilot she’s ready to stand her ground. Cutting all ties with her ex is no sacrifice for Olivia. It’s why she willingly complies with Lorenzo’s uncompromising stipulation.
As their relationship intensifies so do Lorenzo’s suspicions about any man in her life. Determined to not be that weak girl anymore, Olivia demands to be trusted. Despite how vehement her new boyfriend can be, her diligence seems to be working.
But when an unforeseen crisis arises Olivia is forced to make a decision. A decision she knows in Lorenzo’s jaded and suspicious mind could be unforgivable.