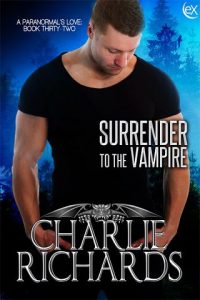 Destrawn has been second of the Aerasceatle clutch for a little over a year. Under Chieftain Kinsey’s rule, Fate has begun smiling on them, and some of their people have found their mates. While Destrawn is happy for them, he doesn’t think Fate will bring him his own any time soon. He doesn’t consider himself good mate material. He’s too dominant, controlling, and some would even say overbearing.

When Destrawn heads to the nearby Maven vampire coven to hear news that could be too dangerous if voiced over the phone, he discovers he’s wrong. The vampire giving the report regarding the paranormal hunters descending on their area—a seasoned and savvy tracker named Sorbin—is his mate. Ready or not, Destrawn knows he has to accept him. After all, he only gets one, and if he doesn’t accept Sorbin, the vampire’s ability to feed will be compromised, which would lead to his death.

Can Destrawn learn to surrender to his mate’s needs while remaining strong enough to keep everyone safe?