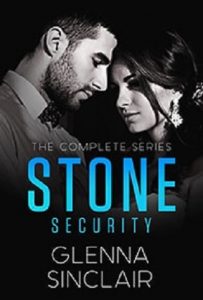 JACK
Running from her past, Raelyn ends up at the doorstep of security firm owner, Jack. Needing help and shelter, Jack offers her both. Under attack, they can’t help the connection that builds between them. With the past breathing down her neck, she has to do her best to survive, no matter what.

BRENT
He was wearing street clothes. That’s how I knew he didn’t fit in and, in lieu of the attacks that had been happening to the girls at the club, I knew he was either trouble or salvation. When he came to talk to me, he wouldn’t look me in the eye. What kind of a man does that? But when he did…was it possible to see your future in someone else’s eyes?

REMY
There was no excuse he could offer that could convince me that we weren’t meant to be together. I mean, he did work for my big brothers and they could be a huge obstacle in any relationship I was involved in. And his best friend was my other brother. Then there was my crazy boss, spouting insane stories about the chief of police. Oh, and the warrant that was issued for his arrest was an issue, too. But those weren’t real obstacles, were they?

AIDEN
Wasn’t it just inviting trouble to bring someone into my life, someone who wanted to go out and be social, when I was hiding from dangers that could be lurking around the corner, or hundreds of miles away? He was hot, a former Navy SEAL, the kind of man who could clearly take care of himself. And I needed a little of that in my life. Was it really wrong to crave the safety of a man’s arms?

GENTRY
I had a secret I needed to tell, but when I saw him at the airport, my tongue twisted in my mouth. And when I saw his fiancée standing behind him, my heart shattered and the words were lost. How could I tell him now, now that the evidence that he’d gone on with his life was standing in front of me in the persona of a living, breathing German doll? I couldn’t do it. But then a vendetta some motorcycle club held against his brothers came to roost on my doorstep and we were thrown together, forced to breathe the same air again for the first time in ten years.