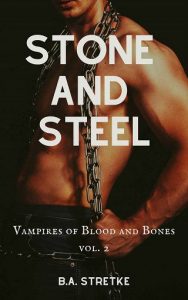 Silas Patronne was on a mission for his Coven, Coven DuCane, in Perrysburg, Ohio trying to locate the missing brother of a friend of the Coven when he met the most fascinating creature he’d ever laid eyes on. Locked away in a closet, tortured but not broken, he found his forever love chained to the floor and borderline feral. He and many others were held captive by the Coven in Perrysburg and used and tossed away, but this man would not be broken. Silas marveled at the strength and fortitude of his beloved and wondered how he would ever pierce the armor and win his beloved’s love and trust. Life hasn’t been easy for Wolfe Reynolds, even before he was kidnapped by this evil coven of vampires. Baggage is Wolfe’s middle name and he’s gotten so used to being on his own, so used to running when things get tough, how can he even begin to believe that Silas really loves him. Silas is determined to win his beloved’s trust and avenge his treatment at the hands of this renegade coven, by any means necessary. No one torments a beloved of Coven DuCane and lives the tell the tale.

Wolfe Reynolds has known hardship all his life. From the foster care system, to the streets, to dancing on a bar for tips, nothing has come easy. When he sees a naive young man being lured out to the back alley behind the bar, he knows he has to step in, what he doesn’t know is that he is no match for the creatures waiting for him. Chained and alone in a dirty and dank closet, Wolfe refuses to give these monsters the satisfaction they want. He fights every feeding and ponders his next move. When Coven DuCane comes to save the day, Wolfe is unsure. Can he trust these vampires any more than the others who have held him captive? He grows attached to the man who freed him, Silas Patronne, but he cannot let himself fall for him. He can’t let himself be that vulnerable again. Danger lurks beyond the walls of Coven DuCane and to protect Wolfe, Silas will invoke an ancient rite, so barbaric it was relegated to history, until now. Can Silas avenge his beloved and come out of this alive? Can Wolfe learn to trust his heart and the man who holds it?