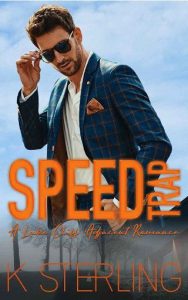 Things have been a little too quiet in Lake Cliff.

Mr. Blink sees that as cause for concern so he’s sent his best fixer and spy, Eldon Speed, to keep an eye on things. But you can’t take your eye off of Mr. Speed, as Blink and Lavender are about to learn. He’s a master of chaos and deception and he’s been waiting for the perfect opportunity to make his move.
Blake West was only meant to be a ticket into Lake Cliff but finds himself caught up in Speed’s trap. The cocky young real estate agent has always idolized his heroic older brother but Blake discovers that things are not what they seem in this particular suburb. Blake doesn’t think he has what it takes to run with the big boys but he might be the only one who can stop Speed in his tracks.
What happens when chaos comes to town and meets his match in the least likely of heroes? Will Speed reveal what’s up his sleeve and can Blake prove the dashing trickster isn’t beyond redemption?