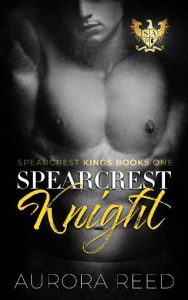 Five years ago, Evan Knight was my favourite person at Spearcrest Academy.
When every rich kid treated me like I was the dirt under their shoes, he was the only one who accepted me for who I was.
Until I found out his golden exterior is only there to hide a rotten heart.
Now, every encounter with him is a nightmare.
But in nightmares, you can kill your monsters.
Evan is a monster I can’t kill—no matter how much I want to. The kind of monster I’ll never be free from until I escape Spearcrest.
I just have to make it through our last year.
I’m rich enough to have anything or anyone I want.
Anything or anyone—except for the stuck-up prefect Sophie Sutton.
But I don’t want Sophie. I just want to break her. Because clashing with Sophie isn’t just for my amusement—it’s become an addiction.
She thinks she’s gotten good at avoiding me, until Spearcrest sets her up to tutor me. I have a year to break her.
My dearest opponent, my hateful adversary.
Let the battle begin.