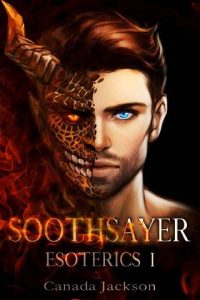 Salome was raised in a fundamentalist community. She is being courted by the head of the church and has done little more than hold his hand as prescribed by their rules. She wears their uniform on her body and obeys their rules with all her heart, terrified that any deviation will cause the loss of her salvation.

She had been taught from the moment her breasts began to grow that she needed to hide the things away that may make men desire her. Men were hapless; they reacted to a woman’s wiles despite their desire for goodness and the quest for modesty and sobriety rested solely in her hands. She denies everything carnal that simmers within her and succumbs to manipulation and control that borders on abuse.

A chance meeting throws her into the world of the Nephilim where she meets a half demon named Braith who is the opposite of everything she has been taught. He is beautiful, powerful and empowering. He sweeps Salome off her feet and shows her that the line between good and evil is sometimes blurred.

She yearns to be free from her community and the indoctrination of her strict upbringing and considers joining his coven of half demon warriors who are about to embark on a war against their evil brethren.
But that would mean becoming an immortal and equally powerful “Daughter of the Night” and this would bring a whole new set of challenges.

Soothsayer is Book 1 of a 5 part series but can be read as a stand alone.

FROM THE AUTHOR: Soothsayer tackles fundamentalist thinking and every woman who has ever felt sympathy for a female raised in a patriarchal system will love the liberation of the main character.