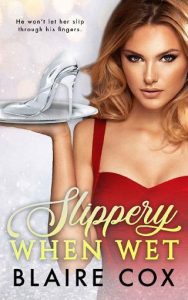 He won’t let her slip through his fingers…

Notoriously clumsy Cyndee Wilson often feels she can never do anything right. But despite being a klutz, she has an ailing father and two younger sisters to look after, so she accepts the job as dishwasher at a high-end restaurant. When a coworker looks past the clumsiness and lets Cyndee work as door hostess for the restaurant gala, Cyndee never dreams she will cross paths with Enrique Castillo, one of the world’s most eligible bachelors.
Neither does she suspect that cozying to this prince means an invitation to the Player’s Ball, the exclusive, down-and-dirty club for the rich. At this scorching soiree, Cyndee cannot deny the sizzling attraction she and Enrique feel, nor resist an after-midnight tryst where being slippery when wet is a very good thing…
But when Enrique’s hot and decadent world begins to intimidate her, Cyndee figures it’s okay to bail. After all, she is accustomed to good things slipping away. The problem is, Enrique is not about to let true love slip away. And one slip up, one misstep…means Enrique’s entire kingdom will come crashing down.