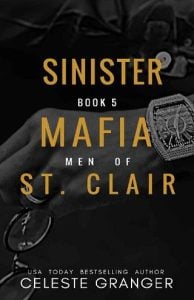 This is not your ordinary romance. If you are looking for a direct line to happily ever after, this is not the book for you.

This is mafia romance. There’s a war going on, an attack has taken place, and the battle for ultimate control heightens with neither side willing to concede.
But war has never stopped love. War won’t stop Rome and Reign.
International buyer, Reign Angelle is the face of her family’s multimillion dollar international corporation, Global Angelle. Intelligent, feisty and Trinidadian sexy, Reign can have any man she wants. Yet, Reign is single, unimpressed by the men who’ve approached her despite their financial status. Satisfaction in Reign’s life comes from ruling in the board room, transacting multi-million dollar deals and solidifying her familial legacy. She has dreams of becoming CEO of Global Angelle despite the patriarchal inclinations of her family.
Rome St. Clair is also interested in continuing his family’s legacy while building his Men’s Clothing Line, magnifying his impact by taking his brand international. Recent events from the family’s ongoing war with the DiCarlo’s nearly halts Rome’s dreams of expansion. Guilt from individual pursuit nearly derails his entrepreneurial endeavors. Because of everything happening in Rome’s life, romantic pursuits is the last thing on his mind. He is not averse to love or lovely women, Rome simply doesn’t have time.
Although reluctant to attend, a business meeting with a family friend places Rome and Reign in the same space. Almost instantly, focusing on business becomes a struggle, the enticingly undeniable magnetism between the two making it difficult to concentrate, and impossible to forget. Despite Reign’s denial, being in Rome’s orbit causes a cacophony of conflicting emotions that only a subsequent encounter with him can resolve.