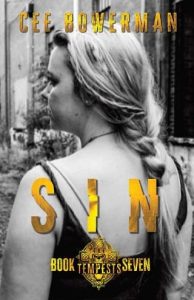 Sin Tempest has spent her adult life in the shadow of the tragedy that thrust her family into the spotlight in the worst possible way. After years spent in the protective circle of her siblings, she fell in love with the wrong man and was gradually sucked back into the same awful situation she’d endured as a child. As much as they tried, the Tempests couldn’t manage to break Sin free.
After years away from her family, tragedy strikes and they’re back by her side as they band together to escape the unwanted attention that has found them again. Old friends that are more like family come to the Tempests’ rescue once more, and Sin and her family find refuge in a place that’s almost too good to be true.
Now facing public scrutiny and trying to raise her little family on her own, Sin has to learn that the mistakes of her past don’t have to decide her future if she’ll just give love one more shot.
Blaze Westland ran from his small hometown to escape the expectations that were thrust on him after his father’s death. When his beloved grandfather falls ill, Blake is called home. After making a deal with his grandfather in exchange for a life saving surgery, Blaze settles into the role he was always meant to take.
Years ago, when he was still just a child, Blaze fell in love. Now, as an adult, he has the opportunity to make the dream he’d had years ago a reality, but he’s got to convince the woman he loves to take a chance on him.