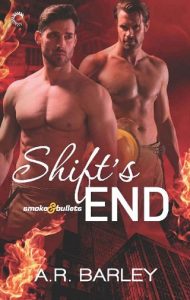 With a couple failed marriages under his belt, Captain Jack Tracey knows how tough it is to balance a personal life with his job. But nothing in his long career has prepared him for the moment Diesel Evers walks into his firehouse. Sure, Jack’s contended with cocky young recruits before, but this seriously hot hotshot rookie is poised to crash and burn. With early retirement in sight, Jack can’t afford to get involved with a subordinate.

Having transferred to Jack’s house after a disastrous relationship, Diesel isn’t looking for another commitment. But that doesn’t mean he can’t have a little fun with his sexy silver fox of a new boss. Sometimes you have to bend the rules a bit…or shatter them completely.

With an unidentified saboteur endangering his squad, Jack doesn’t want to draw any more heat, but Diesel is too damn tempting to deny. Indulging their desires feels worth the risk—until trouble on the job lands Jack in the hospital, forcing them both to decide what’s worth fighting for.