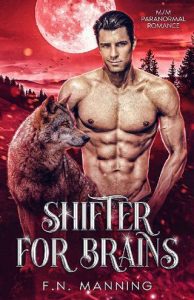 Lucas used to be able to do calculus in his head, but nothing’s adding up quite right after a nasty car accident five months ago. The paranoia about being watched that drives him from his apartment seems totally nutty…until a freak accident creates a flash fireball that nearly leaves him extra crispy. With his mind playing tricks on him, he can’t trust his own senses. But he does trust the man who rescues him.
Chase’s good looks and charm always get him out of trouble, but the detective didn’t climb the ranks just by being a pretty face. He’s confident he can solve the mystery of Lucas Milton and prove he’s more than the boss’s little brother. But professionalism isn’t his strong suit and the growing attraction between them is hard to deny.

Can Lucas and Chase put their heads together and figure out who’s hunting Lucas, or will being outsmarted turn deadly in Shifter for Brains?