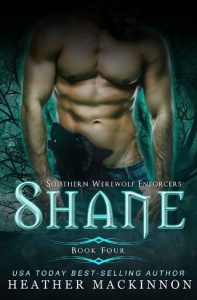 Can he save her from her future?

Shane Harding only became an enforcer for the paycheck. With a sister and elderly parents to support back in Alabama, making money was all that mattered. However, he quickly learns his new pack has dark secrets to hide. Orders are orders, but now the blood of an innocent man is on his hands, and there’s nothing he can do to change that. He knows he’ll never be able to forgive himself, but worse, he knows she won’t either.
Isabella Simmons has lived in captivity her entire life. Her bars may be made of gold, but they were just as good at keeping her trapped. She used to rebel against her parents, but when she lost her twin, she also lost her will to fight. Every moment spent in her lonely tower chipped away at the person she’d been until there was almost nothing left. Meeting Shane was like finding the light at the end of a long, lonely tunnel, but a happily ever after is out of the question.
When Shane is given another cruel command from the alphas, he’s finally had enough. He was getting the hell out of Atlanta and taking Bella with him. Can he save her from the fate her parents arranged, or will he lose her for good?