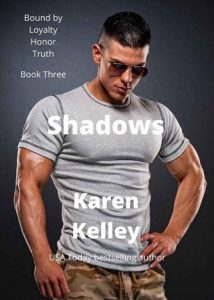 Someone murdered her family when she was only four years old and they said her father was a dirty DEA agent. A friend of her father’s keeps her safe for the next twenty years.
Raven’s all grown up now, and she wants answers. She’ll come out of hiding to get them, but she doesn’t expect a special ops guy with a hot bod to get in her way and order her around.
Yeah, she doesn’t handle orders well, and she’s pretty badass herself. One other thing Ty doesn’t know, she’ll stop at nothing to get to the truth.
***
Ty works for the government–a shadow in stealth operations. He’s dark and dangerous, a panther who stalks his prey.
But when someone attempts a break-in at the company he’s been investigating for the last six months, he’s afraid his cover will be blown, and he’s mad as hell.
It won’t be as easy as he thinks to stop the thief. Not when he discovers she’s a very sexy female who fights dirty. Oh yeah, she’s good. But she doesn’t know that he fights dirty, too.