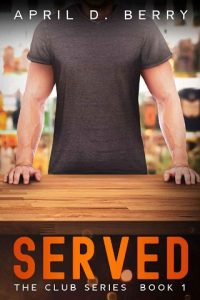 She tosses men away, he’s a hothead that grew tired of trying. When he swoops in to rescue her, will they find each other?

26 year old Lucy loved her fun radio job, her cool apartment, her best friend, and a revolving door of men. She had big dreams to have her songs played on the radio, so she had no time for a serious relationship. She really just needed a warm body from time to time and had no problem dropping the men she always found herself involved with. Her favorite hangout always had music execs but they came for the bands who played. When she landed the lead singer gig for the house band at the club, she was one step closer to realizing her dream of becoming a professional songwriter.
Burly bartender Jason had the hots for Lucy, but she was too busy entertaining losers to notice him, even though he worked at the club she frequented. He gave up on her a while ago but couldn’t help look. It was probably for the best, he had already been through a lot and didn’t want to be another notch for her. But her curls and curves were not helping him move on.
But when Lucy found herself in a dangerous situation and Jason came to her aid, would she change her tune? Was there something there all along? Or would it turn out to be a huge mistake?