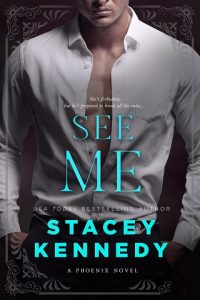 In the Phoenix club, fantasies come to life, but he wants her for real, and he’ll do anything to prove it in this deliciously sexy romance from bestselling author Stacey Kennedy.

Lottie Harlow spends her days as a dog walker and her nights losing herself in wild fantasies at Phoenix, a members-only, voyeuristic sex club in New York City. Her anonymous existence is precisely planned. She must lay low, or risk facing the consequences of her family’s criminal past. She’s a ghost, and she likes it that way. But detective Hunt Walker is determined to uncover her secrets…
Hunt has always loved his nights at Phoenix, but they’re no longer enough. He wants more. He wants a relationship. He wants Lottie. He’s wanted her for years. The only problem? Lottie keeps him at a careful distance, never letting him get too close, ignoring the sizzling heat burning between them. He knows she’s intrigued by him, but she’s scared. He just can’t figure out why… But when enemies from her past come seeking revenge for her family’s deal gone wrong, Lottie’s secrets are revealed, and so is the explosive passion they’ve been fighting.
Soon, lust leads the way to love, but when Lottie’s brothers start threatening her, the line between right and wrong is blurred. Hunt becomes torn between his duty to his badge and his need to keep Lottie safe. But he’ll only get one chance to prove to Lottie that she’s worth fighting for… and that their love is worth the risk.