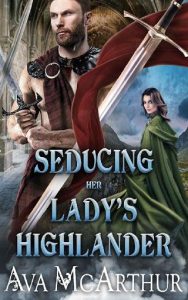 Their hearts were once connected. Now he is a sin.

Claire’s childhood in the Wallace clan had been dreamy until the dreadful day the Ross clan attacked them. Amidst the horror, the young child was saved by a kind warrior after her family was killed… Since then, Claire has been living in the Ross clan, and she has never hidden the fact that this was not her original home.
However, after so many years, Claire has grown to love the place and the people and believes that the Wallace clan will never play a role in her life again. Yet, when when the Ross lady, whom she serves, becomes a widow, Claire’s past will revisit her as Tarran Wallace, the second son of the Wallace Laird, arrives at their doors!
Since his brother is the Wallace heir, Tarran will try to become the Ross Laird and bring peace between the two clans. Thus, among several other men, he will try to marry the widow of the late Laird. Many believe that his chances are rather good as Tarran might not care much for etiquette, but every woman’s head turns when the tall, redheaded devil walks into a room.
Claire, however, has a secret reason to look at him because Tarran had been her childhood friend! Not knowing if she should talk to him and unsure whether he will remember, she tries to avoid him. However, when their paths cross again, the romance that will develop between them will be so forbidden that their union could destroy more than their own lives…