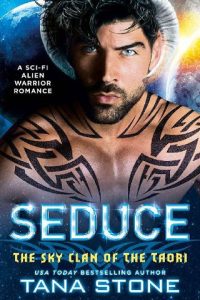 I thought being kidnapped by vile, alien slavers was bad enough. Then I woke up on a lust moon.
I know all about the Xulonian recreation moons, but I’d hoped to end up on the hunting one. As a security officer for the empire, I know how to fight. I am not prepared to wake up practically naked on a strange island.
It doesn’t take me long to figure out that the hedonistic island I’m trapped on isn’t what it seems—and the voyeurs who pay to watch aren’t easily satisfied.
With no weapons and no way off, hiding is my only option. Until I run straight into him.
The massive Taori isn’t willing to put on a show for our captors either. He’s determined to escape. Teaming up with him makes sense until the carnal lust surrounding us triggers his mating fever. Now the only way to escape may be to give the alien voyeurs—and the Taori warrior—what they so desperately want.