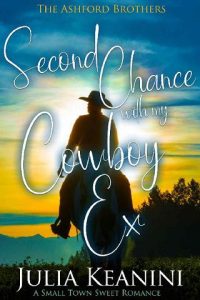 To cowboy and rancher Logan Ashford, family is everything. With the recent death of his beloved father, that sentiment only increases. As the oldest of the eight Ashfords, it’s up to Logan to follow in his father’s footsteps, to continue his legacy of not only leading the family but managing their thriving ranch as well. But when a ghost of his father’s past unexpectedly appears, Logan questions how well he actually knew his dad. And their family, especially Logan’s mother, grieves all over again.
Widow and single mom Lake Hollowell is left picking up the pieces after her husband’s death. Everyone thinks young Dr. Hollowell was torn from his family by a tragic car accident, but the truth is so much worse. In the months before his death, Fred had been having an affair. But he lived long enough to try to mend his ways . . . or so Lake thought. Until she finds out Fred wasn’t alone in the car that day. Lake has no idea why his former mistress was with him. And not only is she left with secrets and betrayal, but the one thing Fred really should have left for his family—money—is completely absent. Just before his death he made some terrible investments and there is almost nothing left. With no husband, money, or support, Lake sees only one solution before her. Move home to Blue Falls.
When Logan hears Lake is back in town and looking for a job, it’s a godsend. Lake is the perfect companion for his grieving mother. Her graciousness is just what the whole Ashford clan needs. The fact that he was once in love with her makes things a little messy, but it shouldn’t be that big of a deal, considering they were teens then. Although that hadn’t stopped him from comparing every other woman who’d entered his life to Lake. And they’d all come up short. Logan was a fool to break up with Lake, but by the time he realized his mistake it was too late. She was happy with someone else—Logan’s childhood friend, no less. And even though he hadn’t been close to Fred in years it was only right that Logan step back. So he does. Until Lake comes back to Blue Falls.
Lake keeps telling herself that the Ashfords’ kind offer is her saving grace and Logan is typically just the kind of boss she’d want . . . if it weren’t for his muscled shoulders, charming smile, and the way he fills out his Wranglers just right. Though Logan’s obvious appeal scares her, she takes the job because she has no other offers and is drawn to Mama Ashford in her sorrow.
Attraction inevitably blossoms, and Logan feels guilty for what feels like disloyalty to his former friendship. Lake, though betrayed, isn’t ready to move on from her marriage . . . it just isn’t done. What will the town—or more importantly, her daughters—think?
But as the chances of Logan and Lake finding happiness together dwindle, the two can’t help but ask themselves: how can something that everyone says is so wrong feel so right?