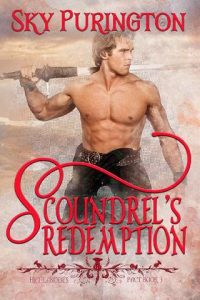 A widowed Englishwoman with a difficult past and a battle-weary broken Highlander come together in a tale of redemption.

Haunted by a dark past and resolved to a loveless future, Greer Hastings has accepted her lot in life. She will marry a man of her uncle’s choosing to better their family’s station. First, however, she will see her friend and her children freed from her uncle’s clutches. An impossible feat. Or so it seems until her long-lost mother returns alongside a Scotsman who makes an offer she can’t refuse.

Teagan MacLauchlin will do whatever it takes to see through the pact he made with his brothers. Marry to fill the clan’s coffers. What he doesn’t expect is a lass as broken as he on the other side of that bargain. Someone truly in need of saving. Determined to free Greer from her greedy uncle and depraved fiancé, he’ll do anything to get her out of there. Even if it means bringing the wrath of two English barons down on his head.

Embarking on a dangerous rescue mission in hostile territory, Teagan and Greer navigate the treacherous English-Scottish border on an adventure for the ages. One fraught with not just the monsters chasing them but the demons from their past.

Can two damaged hearts come together amidst so much turmoil? Or will what haunts them ultimately drive them apart?